I'm gonna say it and I don't care if you like it or not but you do not have the right to an opinion.

You have the right to have an informed opinion, and that is all, and if you choose to exercise that right back it up with some nugget of good advise or wisdom, be in-fucking-formed.

I am sick and tired of people who sit behind computer screens sprouting shit about what everyone else is doing, yes doing!!!! you just sit on your fat ass and spew your critique as though you deserve to be able to do that. Well fuck you, you don't, and I will now have to explain this before you run crying to your hate spewing keyboard.

A good friend of mine Jens, is a custom bike builder, we tinker, he's a great designer and enjoys carrying it through to motorcycles. He built Octavia, a BMW G650 X Challenge. 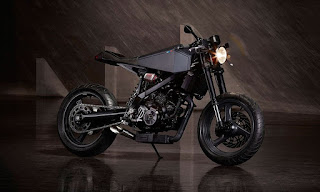 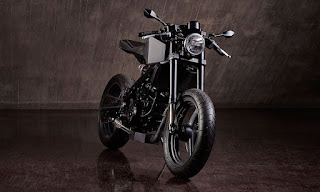 Love it hate it, it doesn't matter because it's what he wanted to build, and that was his vision, and you can criticise all you like, but until you get of your ass and do what it takes to build, trouble shoot then test ride and market a project like this, YOU DON'T KNOW WHAT YOU ARE TALKING ABOUT!

(Insert whiney voice)
"But as a designer, and purely from a design point of view" No, fuck you, you have none of the parameters and problems faced by the project, so no you don't get to talk shit.

(Insert whiney voice again.)
"So what you are saying dude is that I can't have an opinion?" You can have one but keep it to yourself if you can't be constructive, and if an opinion is all you can offer, the very fucking least you can do is make it count for something.

So now all you armchair critics can have a field day, because from behind your screen you are nice and safe, the way you like to be, your little self entitled bubble. A safe place you can deliver your bile without getting a swift kick in the face for being the gutless dickhead you are. Go do something constructive instead of taking other people down. Give someone support instead of belching vile hateful comments, use the language to make something positive.

Sitting behind a screen in the safety of your bubble doesn't keep you safe from Karma.

I think that most woman think I'm a misogynist, I just think I have a shit sense of humour, but I have to say that I have been made incr...